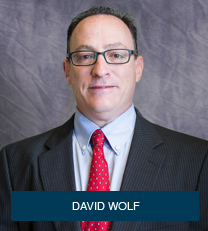 David Wolf has been practicing law for over 27 years as an attorney / advocate for injury victims of all ages. Mr. Wolf has represented both children and their families as the lead attorney. He has also has served as co-counsel in cases throughout the United States on a wide variety of personal injury, child injury, automobile accident, bicycle accident, pedestrian accident, day care injury, school injury, sports injury, dog bite, amusement park, theme park, premises liability, slip and fall, assault / bullying, and medical malpractice matters.

He is the author of eleven books including the book titled The ABCs of Child Injury – Legal Rights of the Injured Child – What Every Parent Should Know. The latest book – Watching Out for Motorcyclists – Freedom, Liberty, and Justice – Legal Rights of Injured Bikers, was published in 2017. He serves as Editor for the Child Injury Lawyer Blog. As a child injury attorney and child safety advocate, Mr. Wolf has been interviewed by a number of publications including Time Magazine. Over the years, Mr. Wolf has authored a total of 4,000 articles focusing on child injury and safety issues.

Over the past 27 years, Mr. Wolf has garnered praise by clients, colleagues, and judges. He is an AV Rated Attorney by the prestigious publication Martindale Hubbell. AV Preeminent is a significant rating accomplishment – a testament to the fact that David Wolf’s peers rank him or her at the highest level of professional excellence. The Legal Ability ratings are based on performance in five key areas: Legal Knowledge, Analytical Capabilities, Judgment, Communication Ability, and Legal Experience. Mr. Wolf is rated a 10.0 on the Avvo Rating System which evaluates a lawyer based on the information available an attorney’s Avvo profile and other sources including client reviews, attorney endorsements, and data provided by the State bar association and other sources. In 2015, Mr. Wolf received the Avvo Client’s Choice Award and the Avvo Top Contributor Award for his postings and written contributions to the Avvo Website. 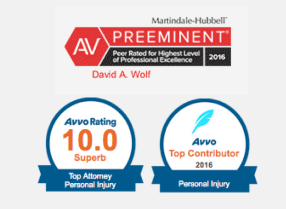 Mr. Wolf is active in the community where he has served as a volunteer for a number of organizations and institutions including Jacksonville Jewish Community Alliance, The ARC Jacksonville (For people with intellectual and developmental disabilities), Big Brothers and Big Sisters, Julington Creek Elementary School, Fruit Cove Middle School, Durbin Community Connections, Creeks Soccer, and The Florida Elite Soccer Academy.

The Jacksonville Jewish Community Alliance is a non-profit organization and community center located in Jacksonville, Florida. The JCA provides top quality programs, special and cultural events, sports programs, early childhood education, and summer camp programs. Mr. Wolf was appointed to the Board of Directors in 2009. In 2010, Mr. Wolf was awarded the New Leadership Award. In 2012, he was appointed to serve as the Treasurer. He served in this position for the next 3 years. In 2014, Mr. Wolf was honored to receive the Esther Leah Ritz Emerging Leadership Award. This award was given to 50 leaders throughout the United States and Canada. In 2015, Mr. Wolf was appointed to the position of Secretary of the Board and currently serves on the Executive Committee. In 2016 – 2017, Mr. Wolf served the Jacksonville Jewish Community Alliance in the position of Vice President.

In 1993, Mr. Wolf became a Big Brother in the Big Brothers / Big Sisters Program. Mr. Wolf had the honor of seeing his “Little Brother” graduate high school and college. At 6 Foot 3 inches tall, the Little Brother now towers over his Big Brother. To this day, Mr. Wolf and his Little Brother still maintain the friendship and bond that will last a lifetime. The Little Brother is now in his 30s, married to a wonderful woman, and doing well in the world of media and sports production in New York City.

For many years, Mr. Wolf was an active volunteer and leader in the Creeks Athletic Association Soccer Program (Creek Soccer. He served as a coach, team manager, communication coordinator, league volunteer, field marshal, referee, and member of the Board of Directors. He represented the Club as Secretary of the Board from 2011 through 2015 when the Club merged with the Jacksonville Youth Soccer Club to form The Florida Elite Soccer Academy, which is the largest sough soccer organization in the State of Florida. For over 4 years, Mr. Wolf coached and sponsored several 3 v. 3 soccer teams. These teams won a number of tournaments. One of the teams placed 3rd at the Disney 3 v. 3 National Tournament held in Orlando, Florida. Currently, Mr. Wolf serves as a Special Advisor for The Florida Elite Soccer Academy.

Mr. Wolf is married and the proud parent of two children. Raised by two public school teachers, Mr. Wolf understands the value of education and the importance of providing a child with a safe and nurturing environment. He enjoys spending his free time with his wife (Robin Bloom Wolf) of over 20 years, their children, and their three rescue dogs – Hershey, Godiva, and Boss.

As a parent, attorney, and member of the community, David has a keen understanding and perspective of child injury matters. Mr. Wolf can be contacted by calling 1-888-96C-HILD (1-888-962-4453) Toll Free or by e mail at dwolf@davidalanwolf.com