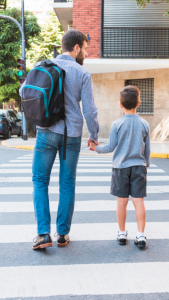 In Utah and other States, children are the unfortunate victims of the negligent, distracted, and / or drunk drivers that cause serious personal injuries and in some cases wrongful death. Certainly, drivers should slow down in school zones, at bus stops, and at parks.  Drivers should also proceed with caution when a child is in or near a crosswalk or intersection.  Tragically, children continue to be the victims of careless drivers on a daily basis.  When a child is injured, a criminal case can be pursued against the negligent driver if the careless driver amounted to a crime in the form of DUI or other forms of reckless conduct.  Justice demands that action is taken in these cases.  There may also be a civil case pursued against the negligent driver. It should be noted that there are many practical consideration that come into play when an attorney reviews a potential civil case for potential legal representation.  One such consideration focuses on the availability of automobile insurance to cover the damages claimed by the injury victim and the family of the injury victim.  Here are the various types of insurance that may apply:
Personal Injury Protection.  In States in which insurance carriers offer such coverage, PIP can provide in most instances up to $10,000 for medical bills and wage losses.  PIP benefits are often paid from a parent’s automobile insurance policy.  For instance, if a child is hit by a negligent driver, the medical bills may still be processed under the PIP portion of the policy of the parent(s) of the child.  PIP can apply even though the parent’s vehicle was not involved in the crash.
Medical Payment Coverage.  This coverage works similar to PIP coverage.  The medical bills may be processed or paid by the insurance policy of the injured child’s parent.  If no such coverage applies, the Medical Payment and / or PIP benefits may be obtained from the at-fault driver’s policy.  This will depend on the insurance policy language as well as the insurance laws in place for the State where the incident / accident took place.
Bodily Injury Coverage.  If the at-fault driver carried Bodily Injury coverage, a claim can be pursued against Bodily Injury coverage. It should be noted that BI coverage works a a bit different than PIP or Medical Payment coverage.  In particular, Bodily Injury coverage is typically paid out in the form of a one time settlement.  PIP and Medical Payment coverage will pay for bills as they are presented.  BI coverage, in most cases, will only pay out in the form of one-time settlement after treatment is completed.
Uninsured Motorist Coverage OR Underinsured Motorist Coverage. This coverage may pay out benefits if the at-fault driver did not carry Bodily Injury insurance coverage or if the at-fault driver did not carry enough Bodily Injury insurance coverage for the damages claimed as a result of the accident. Like BI coverage, UM coverage will typically limit any payout to a one-time settlement once treatment is completed. UM coverage would come from a parent’s Uninsured / Underinsured Motorist policy.  This type of coverage may apply even if the parent’s vehicle was not involved in the subject crash.
There was a recent report of a potential DUI incident that took place in Salt Lake City. It was reported that a child was hit and killed as a result of a driver who may have been intoxicated at the time of the crash.  The incident is under investigation. It was reported that the driver did not carry any insurance.  From a practical standpoint, this case may not be pursued if there is no coverage on behalf of the driver or the owner of the vehicle. It may be possible to pursue an Uninsured or Underinsured Motorist claim assuming that a parent carried such insurance coverage.
In the aftermath of an automobile accident, the insurance laws, regulations, and coverages can be quite confusing.  Because of this, it is often helpful to seek out guidance, advice, and legal representation from an experienced Child Injury Lawyer.  David Wolf is a child injury lawyer and safety advocate with cover 29 years of experience. Attorney David Wolf firmly believes in Giving a Voice to Injured Children and Their Parents.