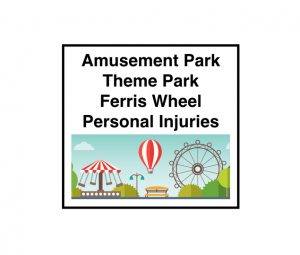 It should be noted that in most States an amusement park or theme park is not an absolute insurer of the safety of children and other guests. In other word, the mere fact that a child or adult is injured while physically on the premises of the amusement park or theme park does not by itself establish a viable claim or case for personal injuries.  For instance, if a child is walking down the midway and trips because his or her shoelaces are untied, this would not establish a claim or case even if the child fractured his wrist as a result of the fall. It was recently reported that three children were injured as a result of ferris wheel incident in which a seat or cart flipped over.  One child suffered a traumatic brain injury as a result of the incident.  When a child is injured at an amusement park, theme park, or fair, there may be a case to pursue against the owner, management company, distributor of the ride, and / or manufacturer of the ride.  Typically, there is some kind of industry and / or government investigation of the ride when there is a serious injury before the ride is put back into the use.  The results of the investigation could provide some helpful information to a civil case or claim for the personal injuries but is not necessarily binding on the future pursuit of a civil case or claim.  See Children Suffer Injuries – Ferris Wheel – Greenville, Tennessee.  It was reported that the three children fell 30 – 35 feet from a seat that flipped over on the ferris wheel amusement park ride.

When a child is at an amusement park, theme park, or fair, it is important for the ride operators to focus on the safety of the child. If a child does not meet the height or age requirements for a certain ride, then that child should not be permitted to go on the ride even if the parent consents to it and even if this leaves the eager child in tears.  All safety devices, belts, harness, and belts should be securely applied.  Furthermore, if there is any compromise, wear, or malfunction of a safety device, part of the ride could be shut down and, if necessarily, the entire ride should be shut down.

David Wolf is the author of 9 books and over 4,000 articles that focus on personal injuries including those involving infants, children, and teens.  He has advocated nationwide for the safety of children.  Raised by parents who were both public school teachers, David Wolf, from an early age, was taught the importance of education, safety, and acting in the best interest of children.  He is the author of the book titled – The ABCs of Child Injury – Legal Rights of the Injured Child – What Every Parent Should Know – which has chapters on Amusement Park and Theme Park Injuries, Automobile Accidents, Day Care Center Injuries, and other topics. You can get this book for free at The ABCs Child Injury.